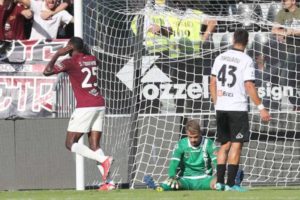 LA SPEZIA, ITALY - OCTOBER 16: Nwankwo Simeon Simy of US Salernitana celebrates after scoring a goal during the Serie A match between Spezia Calcio and US Salernitana at Stadio Alberto Picco on October 16, 2021 in La Spezia, Italy. (Photo by Gabriele Maltinti/Getty Images)

Spezia came back from a goal by Nigerian forward Simy Nwankwo to beat Salernitana 2-1, thanks to a goal and an assist from Viktor Kovalenko in their matchday eight game at the Stadio Alberto Picco in La Spezia.

Both teams were missing several players in this relegation dogfight. With Ebrima Colley, Leo Sena, Martin Erlic, Kevin Agudelo, Mehdi Bourabia, Kelvin Amian, Jacopo Sala, Jakub Kiwior, and Arkadiusz Reca all ruled out, Emmanuel Gyasi had to make do as a left-back for the hosts.

Early on, Spezia did the majority of the attacking, with Eddie Salcedo firing over the bar and then seeing his header from an M’Bala Nzola cross thump the crossbar.

For the visitors, Wajdi Kechrida drilled inches wide, and they took the lead against the odds. For a goal that was Made in Nigeria, Simy took a touch to go past the goalkeeper after Joel Obi flicked on the assist with his back to goal. With it, the Nigerian international scored his first goal for Salernitana.

Spezia drew level with a quick counter-attack, with Kovalenko crossing from the left for David Strelec to smash in from 14 yards off the underside of the bar.

Antiste’s knock-on went inches past Strelec at the back post, and Vid Belec needed to save Nzola and Salcedo twice.

Belec also denied Giulio Maggiore at the near post, but he could not stop Kovalenko, who smashed a curler into the far top corner from the edge of the box with power and precision.

The victory saw Spezia climb precipitously out of the drop zone but only just as they are now on seven points in 15th place while the red lights are blinking for Simy’s Salernitana, who have managed only one win and one draw in eight games and are one place above the bottom-placed side, Cagliari, in the Serie A standings.