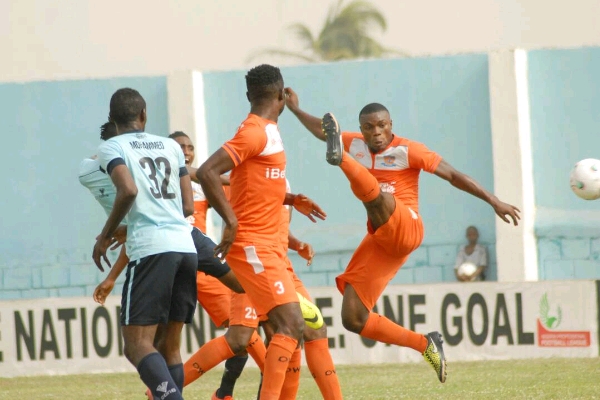 Lobi Stars extended their lead at the top of the Nigeria Professional Football League table after a 3-2 home win against Rivers United in a matchday 14 encounter on Sunday.

A brace from former MFM FC striker Austine Ogunye, one from the spot, and another penalty converted by Ezekiel Mbah gave the Makurdi club the win.

Oche Salefu (penalty) and Frederick Obamate were on target for Rivers United.

Solomon Ogbeide’s men sit at the top of the standings with 26 points, three more than second placed Akwa United.

Champions Plateau United were battered 3-0 by a reinvigorated FC IfeanyiUbah side in Nnewi.

Yaya Kone bagged a brace for the Anambra Warriors, while Tosin Omoyele missed the chance to reduce the deficit for Plateau United when he missed from the spot two minutes from time.

At the Ilorin Stadium Complex league top scorer, Junior Lokosa, scored his 12th goal of the campaign for Kano Pillars who went down to a 2-1 defeat against Kwara United.

The former First Bank of Lagos forward opened scoring for the Sai Masu Gida in the 26th minute, but the home team rallied back in the second half through goals from Sunday Okechukwu and and Lookman Binuyo.

It was the Harmony Boys’ first win in five games following two draws and two defeats.

In Omoku, Go Round rallied back from two goals to draw 2-2 against former Enugu Rangers.

The visitors led 2-0 at the break courtesy of a brace from Ifeanyi George, while Go Round hit back with two goals from Okon Otop, the second a 93rd minute penalty, to earn a share of the spoils.

Former champions Enyimba were held to a 1-1 draw by Yobe Desert Stars in Damaturu.

Mustapha Ibrahim gave Enyimba the lead on five minutes, the first time Yobe Desert Stars would concede a goal at home this season.

The hosts got a share of the points after Philip Auta converted from the spot in the 59th minute.

In another match day 14 encounter, Akwa United and Abia Warriors battled to a 1-1 draw in Uyo.

Samson Obi scored the opening goal for Abia Warriors in the 75th minute before Christian Pygbara levelled scores for the hosts five minutes from time.

At the Agege Stadium, MFM came from a goal down to beat Katsina United 2-1.

The away team took the lead 10 minutes before the break, while substitute Chijoke Akuneto scored twice in the second half to hand his side maximum points in the game.

Abar Umar and Shaman Tanze (brace) got the goals for Bala Nikyu’s men.

The was a late drama in Owerri where Heartland needed a late penalty to beat hard-fighting Nasarawa United 2-1.

MacMarcel Obioha gave the hosts the lead from the spot in the 32nd minute.

Nasarawa United equalised in the 62nd minute through Ikechukwu Nwani.

The hosts were awarded another penalty deep into stoppage time which was converted by Obioha amidst strong protest from Nasarawa United players.

Niger Tornadoes edged Sunshine Stars 1-0 at the Bako Kontagora Stadium, Minna in another game played on Sunday with Austine Igenepo scoring the winning goal on 7 minutes. 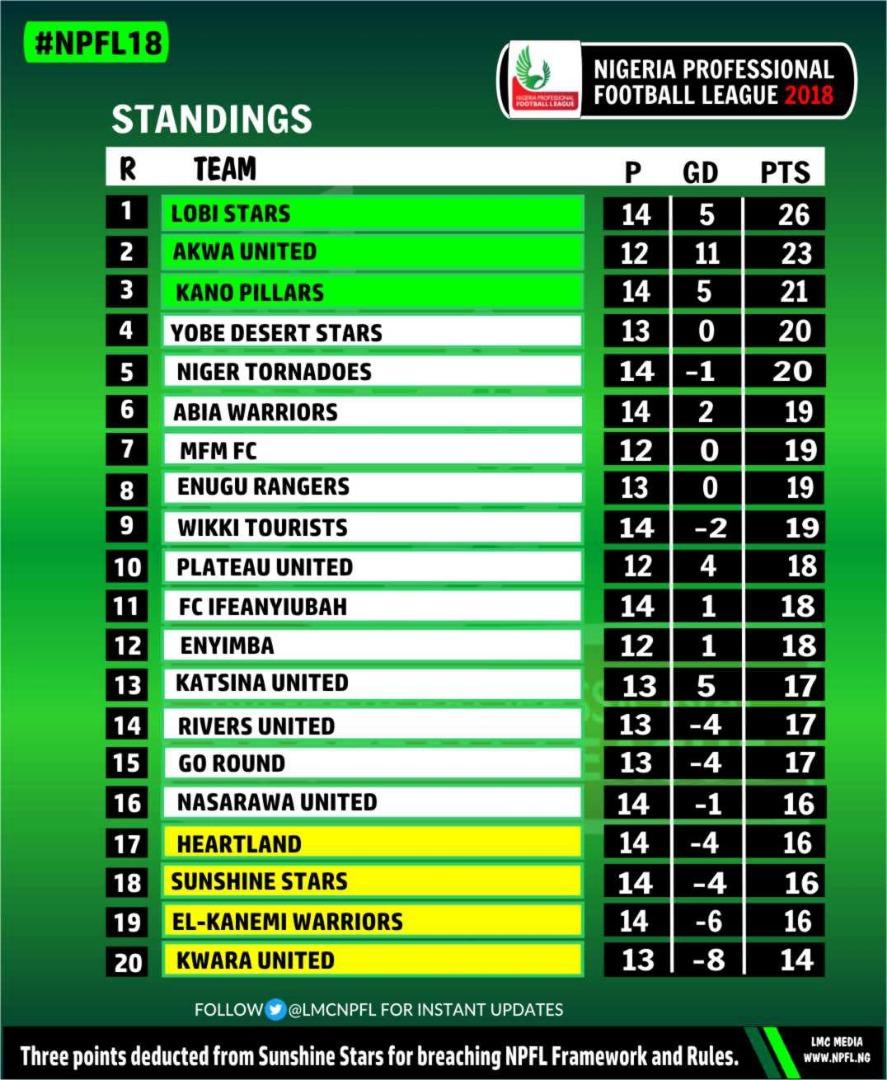