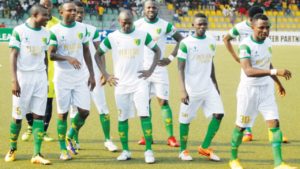 Abia Warriors have kept alive their hopes of surviving relegation from the Nigeria Professional Football League (NPFL) with a 2-1 win against MFM in Okigwe.

Abia Warriors started the game with intent and scored very early in the 3rd minute through Ikennna Stephen.

It was a solo run from his defence line that took him close to the opponents’ box where his effort at goal beat MFM Goalkeeper Jerry Isaac.

The hosts doubled their lead in the 5th minute, when Kabiru Mohammed’s cross found an unmarked Valentine Odoh who headed in to score his 9th league goal of the season.

Abia Warriors should have gone three up, before the 10th minute of the game, but Odoh failed to score off a pass from Ikenna Stephen in the 9th minute.

MFM, however, pushed for goal and scored in the 18th minute, through Alabi Adebayo’s headed effort from a goal kick by his goalkeeper Jerry Isaac.

MFM would come close to leveling scores in the 58th minute when substitute Kenedium Nelson and Mayowa Balogun combined well in the midfield only to have Kenedium Nelson shot palmed away by Abia Warriors keeper Pius Ibrahim.

But the latter’s shot at goal was again saved by Ibrahim and Abia Warriors held on to their 2 -1 win.