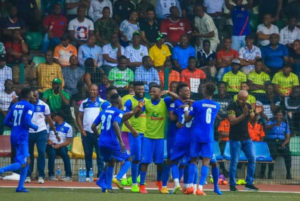 After months of inactivity and delays the Nigeria Professional Football League finally kicked off in style at the weekend with matches played in eight venues across the country.

The race to see who dethrones Enyimba as champions of the NPFL began on Sunday as only four teams – Plateau United, Wikki Tourists, Ifeanyi Ubah and Abia Warriors – recorded home victories while MFM earned a stunning result in Owerri.

It was an interesting battle at the New Jos Stadium in Jos where hosts Plateau Unitedconfirmed their superiority over Lobi Stars with a 3-1 triumph in a thrilling contest that had fans on the edge of their seats throughout.

Nerot Silas put United ahead in the 12th minute before a Solomon Kwambe own goal extended the home side’s lead soon after. Sikiru Alimi netted from the penalty spot to half the deficit for the visitors just before the break. But it proved to be just a consolation goal, after Amos Gyang smashed in United’s third midway into the second half.

The star fixture for the weekend was expected to be in Kano where Pillars played host to Rivers United. However, it ended goalless as Rivers United, who defeated MaiSu Gida in an invitational pre-season tournament in Kano, held the homers to a stalemate.

It was to be another case of points being shared in Delta state where Warri Wolves, just back in the top flight after a three year absence, worked out a 1-1 draw with one of the title favourites, Akwa United.

It took Wolves only 120 seconds after kickoff to find the back of their opponent’s net through Samuel Amadi but on the half hour mark, Akwa United pegged the hosts back courtesy of a fine strike from last season’s top scorer Mfon Udohfollowing beautiful work by Paul Obata.

In Okigwe, Heartland FC coach, Fidelis Ilechukwu, led his team against his old club, MFM who were starting life under new manager Tony Bolus, but it was the Olukoya Boys who returned to Lagos with all three points in the bag thanks to a fine 1-0 win.

Wikki Tourists began their 2019/20 campaign on a positive note by claiming a sweet, come-from-behind win over Jigawa Stars.

Lala Abdullahi’s 15th minute strike handed Stars a halftime lead but soon after the restart, Saidu Abubakar brought Tourists back on leveled terms before Idris Guda fired in the winner with barely 20 minutes left to play.

FC Ifeanyi Ubah welcomed newly promoted Adamawa United to Anambra state and by the time hostilities were concluded after 90 minutes, the Nnewi based side had taught the newcomers a lesson or two with a 1-0 victory.

Samuel Kalu’s goal, moments before halftime, was enough to secure the win for the home side.

There was however better news for another newly promoted team as Dakkada formerly known as Akwa Starlets started life in the top flight with a pleasing 1-1 draw away to Delta Force.

Isaac George thought he had won the tie for Starlets with his strike coming in the second half but Bala Yahuza spared the blushes of the home side with a late equalizer.

Abia Warriors won the battle of the ball-playing sides as Katsina United sank to a 2-0 defeat at the Umuahia Township Stadium on Sunday.

A goal either side of halftime from Jimoh Oni earned Warriors all the three points at stake.

However, the game between Rangers and Sunshine Stars did not hold, same as the Enyimba versus Nasarawa United game because of the continental engagements of the People’s Elephants and the Flying Antelopes.