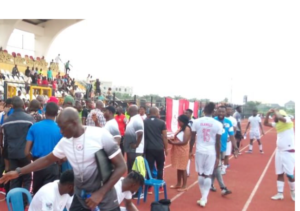 The players and management staff of Rangers International FC of Enugu on Saturday lost their cool after sharing points in their Nigeria Professional Football League Week 34 match with visitors, Rivers United, at the Awka township stadium.

Rangers scored a goal in the 55th-minute through Bala Akintunde who fired a straight ball from outside the penalty box but was rule as offside.

Rangers also said they earned a penalty call, which was ignored by the officials.

The players and officials of the Enugu-based side, including Coach Abdu Maikiba, who refused to speak to newsmen, protested openly, alleging that they were robbed of victory.

The Nigeria News Agency reports that it took the intervention of bodyguards and security men to calm frayed nerves of the Enugu contingent who almost went physical with match officials.

One of the players shouted: “This is wickedness.

“We got a goal, they canceled it.

“We earned a penalty call, the referee ignored it.

“This is pure robbery.”

On his part, Coach Stanley Egwuma of Rivers United said they played well against Rangers despite not scoring a goal.

Egwuma said the result was good for the team and their quest to win the league, pointing out that it had not been easy for the team.

He said he would not comment on the officiating as it was the prerogative of referees to determine what happens on the pitch.

Rivers United are on top of the NPFL table with 71 points from 21 wins, eight draws and five losses after 34 games, while Rangers are third on the table with 52 points from 34 matches.