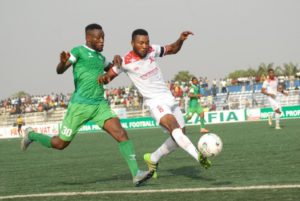 The 2018/19 Nigeria Professional Football League (NPFL) season kicked off on Sunday across six league venues with three home victories, one away win and two draws recorded.

Enyimba   kicked off their campaign with a 2-0 home win over MFM at the Enyimba International Stadium, Aba.

Nelson Ogbonnaya headed in Nasiru Sani’s long throw to hand the seven time NPFL champions the lead after 13 minutes. Abdulrahman Bashir doubled the lead for the hosts Enyimba when he headed in Andrew Abalogu’s freekick in the 54th minute

At the Ilorin Township stadium, Kwara United drew 1-1 at home with Sunshine Stars.

Sasere Franklin put Sunshine Stars ahead four minutes into the break with a lovely lob from the edge of the box.

But Kwara United were back on level terms through an own goal from Seun Olulayo who diverted Usman Mohammed’s cross beyond his own goalkeeper with 20 minutes to play.

In another NPFL game Nasarawa United beat Abia Warriors 1-0 in Lafia. Abdullahi Abubakar glided in Abdul Makama’s cross after 20 minutes to hand Nasarawa United all three points from the encounter.

Akwa United who recruited 13 new players kicked off their new NPFL season on a poor note, going down 1-0 at home to El Kanemi Warriors at the Akwa Ibom international Stadium.

Chinese Sunday scored the only goal of the game in the 16th minute to hand the Sai Masu Gida side maximum points.

Plateau United were held to a goalless draw at home by FC IfeanyiUbah.