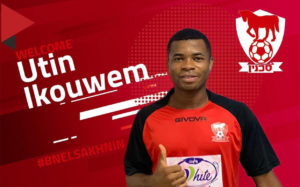 Utin is the latest addition to join Eldad Shavit's team ahead of the commencement of the 2020-21 Ligat Ha`Al campaign on August 8.

The Nigeria international will be hoping to gather more playing time in Sakhnin after he was restricted to 176 minutes of football action in seven league appearances in Haifa last campaign.

Bnei Sakhnin are one of the two teams promoted to the Israeli Premier League this term after finishing second in the 2019–20 Liga Leumit table, behind champions Maccabi Petah Tikva

Utin started his European career in Israel after completing a three-year deal to Maccabi Haifa from Nigeria Professional Football League outfit Enyimba in May 2019.

He developed his game with the Nigerian giants, rising through their youth ranks and he eventually earned promotion to the first-team in 2017.

The 20-year-old was named the NFF Young Player of the Year in 2018 after helping the home-based Super Eagles to a second-place finish at the 2018 African Nations Championship in Morocco.

He was part of Nigeria’s squad to the 2019 Africa U20 Cup of Nations in Niger where the country placed fourth after bowing to South Africa via penalties in the third-place play-offs.

The Akwa Ibom-born defender also travelled with the Flying Eagles to Poland for the 2019 Fifa U20 World Cup, and he played every minute of their games before they were knocked out in the Round of 16 by Senegal.