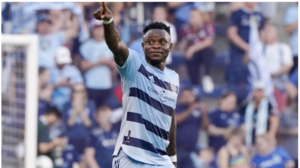 This is the Nigerian newcomer’s third selection to the Team of the Week since debuting for Sporting KC on July 23.

Agada’s first goal came right before halftime when defender Ben Sweat played a centering pass towards him in a dangerous area.

Minnesota goalkeeper Dayne St. Clair charged out and attempted to punch the ball away. This did not deter Agada as he bravely went in and headed the ball off the underside of the crossbar and over the goal line to increase Sporting’s lead to three.

The forward continued to pester Minnesota’s backline in the second half and bagged his brace in the 81st minute thanks to a tenacious effort from midfielder Erik Thommy and a beautiful ball from forward Daniel Salloi.

Thommy won the ball back in the final third with a slide tackle that poked the loose ball to Salloi. After getting around the ball, Salloi took a touch and rolled a perfect pass into the path of Agada who touched the ball into the far corner with ease.

In just eight starts for Sporting KC, Agada has accumulated seven goals and two assists. His seven scores are tied for second most on the club with Salloi this season while his three braces pace the team.