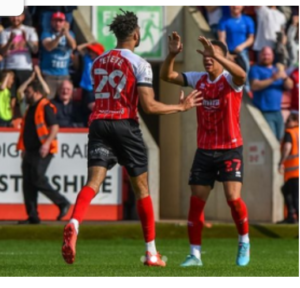 Tottenham Hotspur's Nigeria-eligible centre-forward Kion Etete is attracting interest from Football League clubs ahead of the opening of the transfer window.

Nigeriasoccernet is reporting that Etete has emerged as a summer striker target for League One outfit Portsmouth, a very popular club in Nigeria due to the exploits of Yakubu Aiyegbeni, Nwankwo Kanu and John Utaka.

Portsmouth are facing competition in their attempt to sign the 6ft 6in striker with Millwall among the Championship clubs exploring ways to sign the Anglo-Nigerian.

The key to Pompey winning the race for the signature of Etete is the fact they could offer him more game time compared to a club in the second-tier of English football.

A striker with physical attributes, Etete spent the first half of the season on loan at League Two club Northampton Town and played 23 games before returning to Spurs in the January transfer window.

The 20-year-old was then loaned out to Cheltenham Town for the remainder of the campaign and he didn't didn't disappoint, with a goal involvement of six in thirteen outings for the League One club.

Etete was on target in his final competitive game of the season as Tottenham Hotspur were beaten 2-1 by Chelsea in a Premier League 2 clash at the weekend.