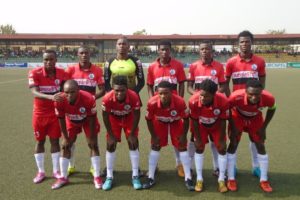 Rivers United consolidated their push to the summit of the Nigerian Professional Football League (NPFL) picking maximum three points from leaders Lobi Stars in their Match-day 15 clash which ended 2-1 in favour of the Port Harcourt side.

Now, the Pride of Rivers State have joined Lobi at the top on same 27 points with the Makurdi team only ahead on superior goal difference.

Former leaders Plateau United suffered another setback in their plot to reclaim the top spot, crashing 1-2 to Sunshine stars in Akure. They have been pushed further down to third spot on 25 points while the Akure Gunners have moved up to fourth on same 25 points but with lower goal difference.

Akwa United who suffered a 0-2 home defeat to Kwara United in Uyo slipped out of the current Top Four.

The Match-day 15 clashes were characterized by amazing three results of away victories in Warri, Aba and Uyo.

Title holders Enyimba lost 0-2 at home for the first time this season to Heartland in an Oriental Derby in Aba. It is the first defeat for new Coach Fatai Osho who replaced sacked Usman Abd'Allah.

The People's Elephants are now just a step above the drop zone.

Rangers made good their intentions to challenge for the NPFL team position after a poor stint in the CAF Confederation Cup group stage.

The Flying Antelopes went to Warri to pick maximum points off Wolves.

Rangers pulled their first away win of the season and move up from the bottom of the table, replaced there by Nasarawa United, while Jigawa.

Golden Stars and Adamawa United remain in the red zone.

However, the real star of the clash was Joshua Akpudje.

The Delta State-born defender made all the difference scoring all three goals which do not qualify for a hat trick.

After bagging the first yellow card of the game, he opened the accounts with a 34th minute own goal when he tried to defend a corner kick but ended up displacing goalkeeper Folarin Abayomi who was already in flight.

Akpudje however soaked in the disappointment and remained determined.

He produced the equaliser with a fine finish from a goal mouth melee in the 41st minute and proceeded to nod in the winner from Akanni Elijah's 69th minute free kick.

Akpudje told our team that he had the fans to thank for keeping faith with the team after the own goal, the reason he went to the crowd to celebrate the equaliser.

Coach Tope Bulos said the team had a slow start but he was sure they were going to pick up steam even with the own goal.

"We had a slow start but I was sure the team will pick up their element which they eventually did. For Akpudje, the own goal was a mistake and mistakes do occur. The good thing is the team was not deflated and Akpudje stood up to responsibility to produce the equaliser and the winner," concludes the coach.