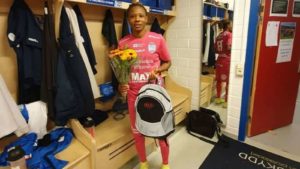 Halimatu Ayinde has penned a three-year contract extension with Eskilstuna United, keeping her at the Swedish Damallsvenskan outfit until the summer of 2022.

The Nigeria international joined the Swedish top-flight side from Asarum in 2018 on a one-year deal with an option of an extension, which expired this summer.

The midfielder deservedly earned a new deal, having provided an assist in 19 outings to inspire Magnus Karlsson's side's resurgence in the just-concluded season.

As a reward, Karlsson resolved to retain the services of the 24-year-old as Swedish tactician aims to improve on their fourth-place finish last season.

The Super Falcons star, who starred for Nigeria at the 2019 Women's World Cup in France, is pleased to extend her stay at Tunavallen.

“I am really happy to be part of the Eskilstuna United family," Ayinde told the club website.

"And very grateful to be able to extend my time at the club by 3 years. Hopefully, we as a family can achieve bigger things next year."

On her part, Karlsson lauded the Nigerian's contribution during their campaign in the Swedish top flight.

“Like many others, Ayinde grew substantially during the latter part of the season," said the manager.

"We found a role where she is comfortable and we both believe we can develop it further. A modern footballer with international qualities."

Having pledged her future to Eskilstuna, the Nigerian will settle well with her compatriot Ngozi Okobi and she will be eager to repay the manager's trust with a better display in the new season.