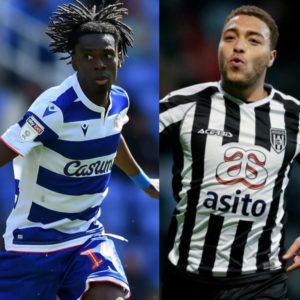 The Nigerian Football Federation (NFF) has begun moves to ensure that the pair of Heracles Almelo forward, Cyriel Dessers and Reading midfielder, Ovie Ejaria get to play for the Super Eagles.

There are valid reports the NFF is trying to convince both Ejaria and Dessers to switch international allegiance to Nigeria and have filed their applications to the Federation of International Football Associations (FIFA).

One of Reading’s standout performers this term has been 22-year-old Ejaria, with the Liverpool loanee having lit up the Championship for much of the season so far since arriving at the Madejski Stadium last summer.

With three goals and three assists in 22 Championship outings, Ejaria has really thrived under the stewardship of Mark Bowen with the Welshman having deployed the youngster largely in a central midfield role that has given him licence to roam.

Ejaria will no doubt prove to be a key cog in any real push for the play-offs that Reading manage to pull off between now and the end of the season with the youngster offering both goals and creativity that will prove vital.

This is what the NFF has seen and are already working on for the player to switch international allegiance to Nigeria, same as Dessers who has had a blistering campaign with Heracles in the Dutch Eredivisie.

Meanwhile, Belgian-born Dessers who is the current leading scorer in the Eredivisie with 12 goals in 18 games for Heracles has expressed his desire to represent Nigeria ahead of Belgium, having attracted interest from both nations.

He said: “After series of discussion with the NFF President, Amaju Pinnick, I have decided to fully commit myself to Nigeria and the Super Eagles and I am going to work to be part of the team and fight for more successs for the country.”