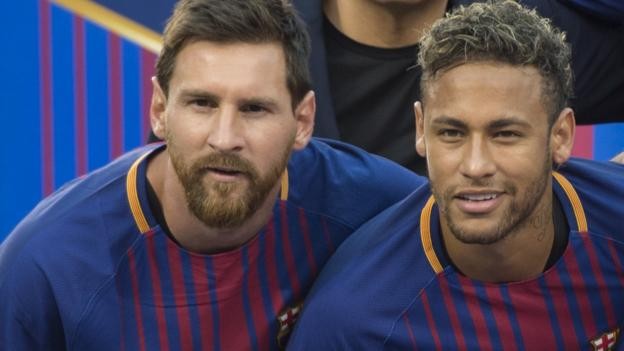 Messi played alongside Neymar for four seasons at Barcelona

Lionel Messi says he would have "loved" for Neymar to return to Barcelona as his arrival would have "increased our chances of achieving our objectives."

"He was desperate to come back," Messi told Spanish newspaper Sport. "I don't know if the club really tried or not."

The Brazil international was repeatedly linked with a return to Barcelona during the transfer window, although it has been suggested that neither club was convinced that the other was committed to making a deal.

"I would have loved to have Neymar back," said Barcelona captain Messi, 32. "I understand those people who are against his return and it's understandable for what happened with 'Ney' and the way that he left.

"But thinking about it on a sporting level, I personally think Neymar is one of the best players in the world and having him in our squad would increase our chances of achieving our objectives."

Messi denied the Barcelona players asked the club to sign Neymar, adding: "We gave our opinions of whether it'd be good if he came or not but we never said they had to sign him."

Despite missing out on playing alongside the Brazilian again, Messi said he was "not disappointed", adding Barcelona have a "spectacular squad and can achieve everything without him."

The Argentine forward joined Barcelona in 2001 and his current contract expires in June 2021.

"My idea is to stay here for as long as I'm capable of playing at the required level and my body allows it," he added.

"This is my home. I don't plan on moving to anywhere else as long as we keep competing and winning."