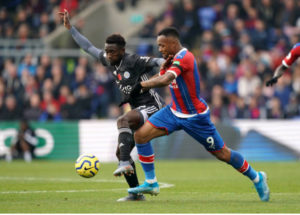 Wilfred Ndidi put in a strong display in Leicester City’s 2-0 away win over Crystal Palace on Sunday in the Premier League.

Ndidi had another good outing for the Foxes, making his 10th league appearance.

The 22-year old made six tackles, the most by any player in the game, 85.1% passing accuracy and 69 touches as the visitors dominated in the encounter at Selhurst Park.

Ndidi featured for the entire duration of the game, while his compatriot Kelechi Iheanacho was an unused substitute for the fourth time this season.

Second-half goals from Caglar Soyuncu and Jamie Vardy ensured the 2016 Champions leapfrog Chelsea to take third spot in the table.