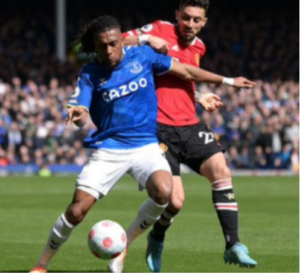 Alex Iwobi has admitted that the final weeks of the 2021-2022 season were his best period as an Everton player since his big-money move from Arsenal in the summer of 2019.

The Nigeria international was the only Toffees player to start Everton's final twelve games of the season and he highlighted his fitness by going the distance in each match.

On the international stage, the Hale End Academy product completed ninety minutes in each of the four matches played by the Super Eagles this summer, including two 2023 Africa Cup of Nations qualifiers.

Things have not been all rosy since the versatile winger arrived at Goodision Park as he struggled in his first two seasons, so much so that pundits and fans alike were of the opinion that Everton paid over the odds to sign him.

Ahead of the new season, Iwobi says he is keen on replicating his impressive displays in the last few months of the 2021-2022 campaign.

"My first couple of years here weren’t the greatest but this [the final weeks of the season] was my best period at Everton," the Super Eagles star told Everton's official website.

"I want to use it as a platform to kick on and make more positive memories with this club.

"I am youngish and have a lot of time ahead.

"I want to win something with Everton – and do my best for the Club."

Iwobi and his Everton teammates begin the Premier League season with a tough clash against Chelsea at Goodison Park.