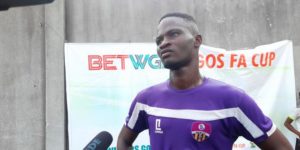 MFM FC hero in the Lagos FA Cup Muyiwa Alade is hopeful that the Agege Boys can beat the drop in the Nigeria Professional Football League, NPFL.

MFM are currently rooted at the foot of the table after taking just 36 points from 34 matches.

However, the forward believes that the Olukoya Boys can pull off the great escape after leading MFM to back-to-back victories in 24 hours.

"It is what it is right now," Alade told Pulse Sports Nigeria moments after their game against Ikorodu City.

The striker was in superb form, scoring a second-half hat-trick as the Prayer Warriors came from a goal down to book their spot in the semi-final of the BETWGB Lagos FA Cup.

Speaking on his performance on the day, Alade had this to say about what he confirmed was the first hat-trick of his career.

Ikorodu City dominated proceedings at the Legacy pitch in Surulere but despite being down at halftime courtesy of a blinder from Ikorodu's captain, Sebastian, Alade said the Olukoya Boys never gave up.

"It's the spirit, never give up," he said. "That's the spirit that's inside all of us - that the coach has impacted on us."

"Even if they're leading us by 2-0, until the final whistle, never give up."

The game against the Ikorodu boys was MFM's second game in 24 hours. The side from Agege had defeated Enyimba 2-1 in the NPFL on Sunday before the FA Cup game against Ikorodu.

The Prayer Warriors were second best throughout the game and could have conceded at least four goals but for Ikorodu's profligacy.

Reacting to that, the attacker added that the game against the People's Elephants affected him and his teammates as they barely rested.

"The Enyimba match had a little impact because playing a game yesterday and you've not rested. But we still thank God we came out victorious," he added.

MFM will switch attention to the NPFL next when they travel to Akure to face regional rivals Sunshine Stars in what is a local derby in the west.

With four matches to go, the church boys are four points away from safety.