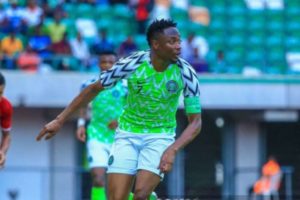 Super Eagles skipper Ahmed Musa has urged the senior national team coaches to expedite action on grooming young players that will take over from him and other experienced players.

Musa hinted that it is pivotal for the Super Eagles to have a pool of players to pick from at every given time, adding, “it is about time we have a new crop of players for the national team.

“I said before the game, for me I don’t have to play but if the coach gives the go ahead for me to play I must obey,” explained Musa.

“The young players are coming up and we have to give them a chance.  Soon maybe Ahmed Musa may not want to continue playing anymore and we have to groom new set of players to over from those that are retiring.”

Musa, 27 began his sojourn with the Eagles on August 5, 2010 in a 2012 AFCON Qualifier against Madagascar then as a 17-year-old while he bagged his maiden goal for the senior national team a year later against Kenya in a friendly game.

The Al Nassr of Saudi Arabia striker has played 88 games for the Eagles with 15 goals and he has featured at two senior World Cup and two AFCON in his nine years spell with the Eagles.