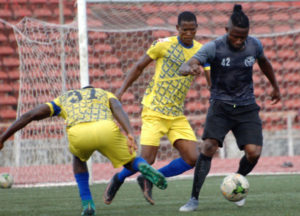 The 2019/2020 Nigeria Professional Football League kicked off on Sunday after several setbacks.

The match of day was the clash between Heartland and MFM FC in Okigwe.

Current Heartland manager Fidelis Ilechukwu endured a torrid start to his Heartland career , as his former side served him an opening day defeat.

MFM FC travelled to Okigwe; with the odds against them, but they came out on top after 90 minutes, as they became the only side that recorded away victory on match day one.

Clement Ogwu, a player signed by Ilechukwu for MFM last season headed home the game’s only goal on the 39th minute from a corner kick by right back Adeyinka Najeem.

The Tony Bulus side however played most part of the game on the back foot as Heartland continued to search for an equaliser.

MFM FC held on for their first three points of the season at the expense of their former coach Fidelis Ilechukwu.