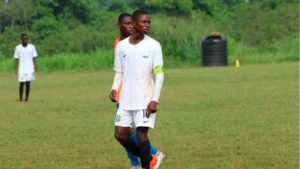 Manchester City are among the clubs interested in Nigeria Under-17 captain Adeleke Oluwatobi Babatunde.

The 16-year-old is regarded as one of Africa's hottest talents, with Napoli, RB Leipzig, Lille and Ajax also showing an interest in the No.10, as teams wait to sign him ahead of his 18th birthday due to FIFA regulations.

Tobi, as he is nicknamed, alerted European clubs to his talents with his performances at the Africa Youth Games in 2018 when his side earned a silver medal.

The Abuja Football Academy graduate was also part of the International Dream Cup in Japan, where he scored in the opening match against Mexico.

He has been a key player for the Super Eagles across various age groups and, in October, he is expected to be the captain of the Nigeria Under-17s team again at the World Cup in Brazil.

The tournament tends to be a hotbed for clubs scouting the next generation of talent and a positive performance in Brazil could put Babatunde on the radar of more clubs.

Nigeria have a considerable pedigree at Under-17 level having won the World Cup five times and finished as runners-up on three further occasions.

Babatunde likes to wear the No.10 shirt and he can operate as either a winger or as an attacking midfielder. He is a player who scores goals and supplies assists as shown recently in a game against Algeria where he got two of each.

“There are a number of clubs tracking Tobi’s progress," his agent Godfrey K Torto of AGM Sports Agency said to Goal. "He is a big talent and I believe one of the next future stars from Nigeria. It’s of no surprise teams are watching him.

"However, for the meantime, the most important thing is for Tobi to continue the hard work he has been doing by taking things step by step. If he continues to do so, I’m sure he has a bright future which we will guide.”

Issues surrounding a work permit might dictate Babatunde's next move. The option of the Belgian league could be explored either on loan from a bigger club or as a direct transfer, due to the country's favourable regulations for African players.