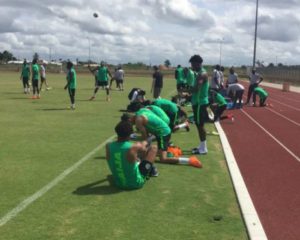 The LMC have rescheduled two NPFL Matchday 2 encounters between Akwa Starlets and Kano Pillars, and Akwa United and Abia Warrior.

Akwa Starlets vs Kano Pillars and Akwa United vs Abia Warriors matches which were earlier fixed for Saturday 9th and Sunday 10th of November respectively will now be played on different dates.

The LMC confirmed on their verified Twitter handle that the Akwa United Vs Abia Warriors match will now hold on Thursday 14th of November, while the date for the other match will be announced later.

Matchday2 fixtures between Akwa United and Abia Warriors moved to Thursday, November 14 while that between Akwa Starlets and Kano Pillars will hold on a date to be announced later”, LMC tweeted. 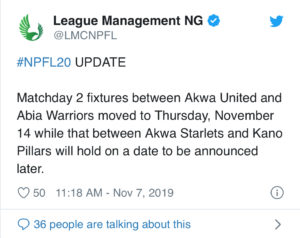 The reason for the decision is not yet confirmed by the LMC but it has been reported that the Godswill Akpabio International Stadium, Uyo which is the venue of the two aforementioned NPFL fixtures will be used by the Super Eagles for camping and training as they begin preparations for their AFCON qualifiers against Benin next weekend.