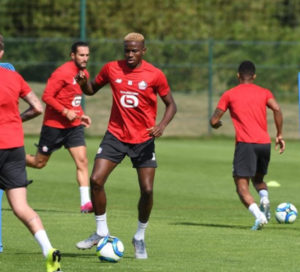 Lille’s Coach Christopher Galtier has confirmed that Victor Osimhen is injured and it could be a big problem for the Club.

After picking an injury in Lille’s 3-0 home win against Girondins Bordeaux on Saturday, Osimhen was replaced early in the second half by former French striker Loic Remy.

Lille manager Galtier told the press conference after the win that his number one striker is down with an Injury that could be serious.

“Victor Osimhen has a pain in the adductor, it can be a big problem,” Galtier said.

Osimhen is now doubtful for Nigeria’s 2021 Africa Cup of Nations qualifying double header against Benin and Lesotho billed for November 14 and 19th respectively.

Osimhen has scored seven times and recording two assists in 11 league outings for Les Dogues so far this season.