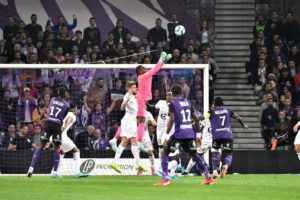 Lille manager Christophe Gatlier has absolved Victor Osimhen of any blame after the forward failed to score for the fifth consecutive away game in the French Ligue 1 this season, reports Completesports.com.

Osimhen has scored seven goals in 10 league games for Lille since his arrival from Belgian club, Sporting Charleroi this summer.

He also endured a barren outing in Lille’s Champions League 3-0 away defeat at Ajax last month.

All of the Nigeria international’s goals so far were scored at home with the 20-year-old also failing to find the back of the net in Saturday’s 2-1 away defeat to Toulouse.

“We lose as a team and win as a team. Osimhen is part of the team. Collectively, we will have to do better away from home not just Osimhen. It’s for the entire team,” Gatlier told reporters.