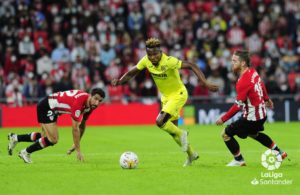 Chukwueze made his second league appearance when he replaced the injured Gerrard Moreno in the 20th minute on Saturday.

The Super Eagles winger went on to feature in the longest minutes since his return from injury which he sustained in May.

However, he could not prevent Villarreal from going down to a 2-1 defeat by Bilbao.

And commenting on the number of minutes Chukwueze featured, LaLiga wrote on their English Twitter handle:” 70 minutes under the belt.

“Great to see you back in action, @chukwueze_8.”

Since his return to action, Chukwueze has scored one goal which was in the 4-1 win at Young Boys, in the Champions League on Wednesday.

He scored in the 92nd minute after just coming on two minutes earlier.