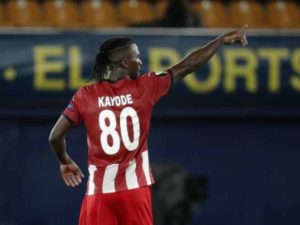 Olanrewaju Kayode opened his goals account in the Turkish Super Lig this season after netting in Sivasspor’s 4-0 home win against Ahmed Musa’s Fatih Karagumruk on Saturday.

Making his fifth appearance in the league this season, Kayode scored just one minute into the game.

The former junior international was later replaced in the 63rd minute for Mustapha Yatabare of Mali.

Kayode’s compatriot Azubuike Okechukwu was introduced in the 76th minute for his fifth league appearance.

On his part, Musa who saw 90 minutes of action in the heavy defeat, featured in his sixth fixture in the Turkish topflight with one goal to his name.

The outcome of Saturday’s game means Sivasspor have now won back-to-back fixtures and are unbeaten in their last five games (two wins and three draws).

For Karagumruk, prior to the loss to Sivasspor, they were unbeaten in their last three games (two wins and one draw).