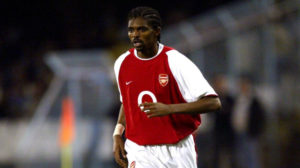 Having scored twice against Chelsea, Nketiah replicated the same feat with another brace inside the opening ten minutes to set Arsenal on their way to victory.

His brace saw him become the first Arsenal player to score twice in the opening ten minutes of a Premier League since Kanu did it against Sunderland in 2002.

Kanu scored in the third and ninth minute as Arsenal won 3-0 against the Black Stars in October 2002.

Nketiah's goals in the fifth and tenth minute against Leeds United make him the second Arsenal player to achieve the feat since Kanu. His two strikes put Arsenal on course for Champions League qualification next season. The Gunners are currently four points clear of Tottenham and will seal qualification if they can beat their North-London rivals.

Nketiah will hope to feature in the game, but his future remains uncertain beyond this season. His contract at Arsenal runs out in June, with no discussions about a renewal yet.

Arsenal manager Mikel Arteta is not worried, though, saying the ex-Leeds striker should be left alone to enjoy his fine run of form.

Nketiah has been at Arsenal since he left Chelsea as a teenager in 2015. He has scored nine goals in all competitions for the Gunners this season.

The forward is currently on the verge of switching nationality to Ghana and is likely to play a key role in the black star's campaign at the FIFA Mundial in Qatar, later in the year.