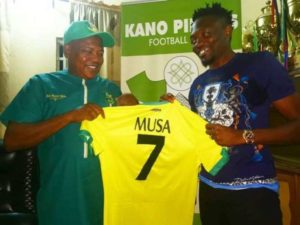 Former Nigerian midfielder, Finidi George, believes the return of Super Eagles captain, Ahmed Musa is basically meant to keep himself fit ahead of the 2022 FIFA World Cup qualifiers and 2022 Africa Cup of Nations.

Musa, who was officially unveiled as a Kano Pillars player on Friday, signed a short-term deal with the club on Tuesday.

In an interview with a Lagos-based radio station, Finidi insisted that Musa’s return to the Nigerian Professional Football League (NPFL) won’t make him a lesser player.

“For him to get playing minutes because the Nations Cup is coming and the qualifiers are coming up; We need him to be in good form. It doesn’t really matter, he has learned a lot outside the country.”

“I don’t think coming back will make him a lesser player, the only thing is that he’s not going to have that good top competition week in week out, that is the only difference. But he has to be fit if he wants to play for the Super Eagles and as the captain, he has to make some sacrifices,” he concluded.