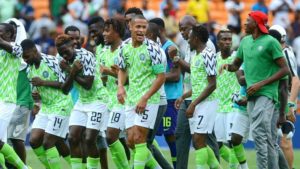 Nigeria’s Super Eagles on Wednesday defeated the Squirrels of Benin Republic 2-1 in the opening Group L match of the Africa Cup of Nations (AFCON) qualifier in Uyo, Akwa Ibom.

The Super Eagles came from behind to win the encounter after conceding an early goal in the 3rd minute of the encounter.

Victor Osimhen scored from the penalty box before halftime to restore parity before Samuel Kalu sealed the victory for the team in the 65th minute.

Nigeria top the group following a 1-1 draw played in the encounter between Sierra Leon and Lesotho in Freetown.

In other matches, Guinea Bissau rattled Eswatini 3-0 in Group I, Central African Republic thrashed Burundi 2-0 in E, while Malawi ran away with a lone goal victory over South Africa in Group B.

Elsewhere, Cameroon ended their encounter in Group F with Cape Verde 0-0, while Namibia overpowered Chad 2-1 in Group A.