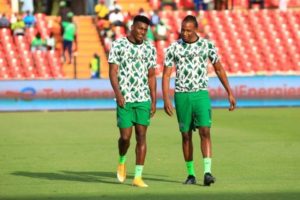 Rangers ace Joe Aribo is happy to be contributing his quota in the Eagles squad and he is surely doing that to the best of his ability.

Aribo a must play under former Ranger coach Steven Gerrard is performing not only for club but for country as well.

Aribo started Nigeria’s first two group games, helping them to wins against Egypt and Sudan that sealed their place in the last 16 with a match to spare.

The midfielder was then rested for their final 2-0 win over Guinea-Bissau as interim Super Eagles boss Augustine Eguavoen sought to keep Aribo fresh for Sunday’s last-16 tie against Tunisia.

“When I called him up for the first time, he scored a goal as soon as he came into the side,” recalls Gernot Rohr, the veteran German coach who gave Aribo his international debut but was sacked last month.

Aribo, who was born in London, made his bow for Nigeria in September 2019, not long after joining Rangers from Charlton Athletic.

“It was a friendly match in Ukraine after the last Africa Cup of Nations when we were looking at new players,” Rohr, who took Nigeria to third place in 2019 in Egypt, tells AFP.