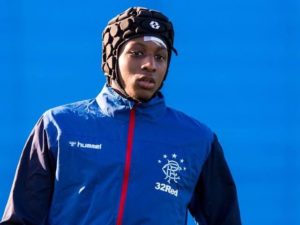 Rangers of Scotland midfielder Joe Aribo has informed the technical crew of the Super Eagles of Nigeria of his availability for the international friendly game against Brazil on the 13th of October in Singapore, Owngoalnigeria.com reports

Aribo suffered a nasty head injury ten days ago in a league cup game but made his return to the bench of Rangers over the weekend as they run out 5-0 winners over Hamilton Academy.

The midfielder has however played down fears about his unavailability to the technical crew of the Super Eagles according to a member of the crew who spoke with Owngoalnigeria.com earlier today.

” Aribo is fit for the game. He has informed us that he will be available so no cause for alarm. There’s a chance of him playing with a protective head gear but it’s very slim since the stitches have been removed from his head”, he told Owngoalnigeria.com.

He went further by said the 25 year old joked about getting another goal for the Super Eagles after scoring on his debut in the 2-2 draw against Ukraine in a friendly game played last month during the last round of international games.

” Aribo felt he should have scored twice in the game against Ukraine. Ahead of the Brazil game he joked about scoring again. He is in confident mood going into the game”.