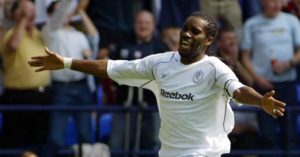 Sadio Mane has left Liverpool after six seasons with the Reds, scoring 120 goals across 269 appearances and winning six trophies as part of Jurgen Klopp 's famous front three. Mohamed Salah - a man who helped make up that trident - joined Mane on Ferdinand's list.

In a tweet posted after the £35.1 million deal between Bayern and Liverpool was completed on Wednesday, the Manchester United legend named his top five African stars and gave out some honourable mentions.

Austin Jay Jay Okocha joined Bolton Wanderers from Paris Saint Germain in 2002. He went on to make 124 appearances for the team between 2002 and 2006 scoring 14 goals for them.