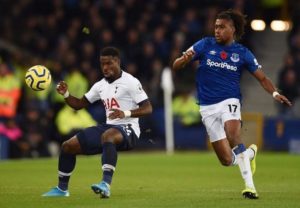 Iwobi who linekd up with Everton from Arsenal this summer has scored one goal in nine league appearances for the Toffees this season.

The 23-year-old featured in 100 Premier League games for Arsenal during his time at the club , scoring 11 goals and made 14 assists.

Everton will look to record their fourth win of the season against Southampton at the St Mary’s Stadium.

Marco Silva’s men are without a win in their last two Premier League games.