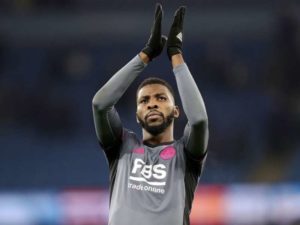 Super Eagles forward Kelechi Iheanacho has praised the effort of his Leicester teammates despite their 6-3 loss at former club Manchester City on Boxing Day.

Iheanacho almost helped Leicester pull off one of the greatest comebacks in Premier League history.

With City 4-0 ahead, a much improved Leicester netted three times in the second half to bring the score to 4-3.

Iheanacho provided the assists for Leicester’s first and second goal before getting the third.

But City put the game to bed by scoring two more goals to end any hope of any fightback.

And reacting to the thrilling encounter, Iheanacho praised Leicester fans for their support.

He wrote on Twitter: “Not the result we wanted, but we showed our character and team spirit in the second half. Thank you to all the fans that came out to support.”

The Super Eagles star has now scored two goals in the Premier League and has taken his assist in the English top-flight to three this season.