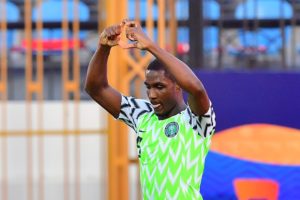 Nigeria forward Odion Ighalo has told the world media ahead of the Super Eagles’ AFCON 2019 quarterfinal clash against the Bafana Bafana of South Africa on Wednesday at the Alexandria Stadium that the Nigeria players will play out of their skin to win and advance in the tournament. Completesports.com’s ADEBOYE AMOSU writes the details of his interaction with reporters. Photos by Ganiyu Yusuf.

It’s going to be a tough game between two good teams. We are ready for the game. Everyone is in good spirit and can’t wait for the game to start. Our target is to win the competition, to do that, we must beat the South Africans and move to the next round.

We know the South Africans have been saying a lot of things on the internet, but we have told ourselves that we must not lose to them.

On The Criticisms Of Ighalo’s Performance In Some Games

I don’t pay attention to criticisms. I don’t listen to what people say about me, as long the coach is satisfied with my performance, then I am okay. I take everything in the chin and focus on my game. I have experienced same at my club and it’s now part of me. As a footballer, it’s something I have had to deal with up till now and it has made me stronger.

On The Chances Of Ighalo Finishing As AFCON 2019 Top Scorer

I put the team ahead in everything I do. For me, it won’t be nice to win the top scorer award and we end up not winning the trophy. Honestly, it is something that interests me, but the team comes first in everything.

On Eagles’ Response To The Defeat By Madagascar

We took the Madagascar game lightly because we had already qualified and paid dearly for it. Now we know any mistakes will be punished and it is our responsibility to avoid a repeat of that.

About Losing To South Africa In AFCON 2019 Qualifiers

It was a bad experience for us. I missed the game as a result of injury. We also missed a number of our key players in that game due to the same reason. The game against them tomorrow is another opportunity to put things right. A good chance to prove our superiority over them.

We have to keep fighting, and against South Africa, we have to adapt to their pace. We will be ready. The loss to them in the qualifiers was tough, but this is a tournament quarterfinal match and it will be a different matter.

They are not that strong compared to the Cameroonians, but they are good on the ball and have pace too.

About Ighalo Mentoring Young Players In The Nigeria Squad

I pass on advice as one of the oldest members of the squad. It is important to encourage the young players and make them understand what it’s like to play in a big competition like the AFCON.

We want to say a big thank you to them for their support. They should believe in us, and we will make them happy at the end of the day.