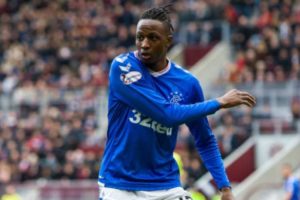 Rangers manager Steven Gerrard is pleased with the club’s midfield and singled out Joe Aribo for praise, after he scored again in a 2-0 friendly win over Coventry City on Saturday.

The 24-year-old Nigerian netted the opening goal at Ibrox in the 50th minute before Conor Goldman doubled the lead 17 minutes later. It was the second game in a row Aribo had scored in after netting in their 4-0 win over Motherwell last time out.

It marks a 100% end to Rangers’ pre-season games, keeping clean sheets in all of them. The Scottish Premiership is set to commence for the 2020-21 season on August 1 with the Gers travelling to Aberdeen.

“The midfield we are okay, we’re looking strong. Joe Aribo’s jumped out of the pack and being really really strong in his performances and we’re creating and scoring goals in the final third,” Gerrard told Rangers TV after the match.

“Well, I think a lot of individuals look ready, both keepers have been fantastic, I think from a defensive unit point of view we’re keeping clean sheets. I think Connor’s showing real good leadership skills and really driving that backline to keep clean sheets

“I think we are looking strong in the full-back areas if you look at over the course of the pre-season. I thought they could have been a little bit better in terms of how they were playing when the ball came to them.

“The only thing I’m slightly concerned about is obviously our options in the number nine position and it’s something we’re trying to address and it’s the reason why I had to be trying to be wise with Alfredo [Morelos] and get him off the pitch as soon as I could.”

Rangers recently signed Nigeria defender Leon Balogun from Wigan Athletic on a one-year deal with the option of extending it for another year.

Gerrard believes Balogun’s arrival will create competition for places at the back, something the Liverpool legend is keen to see.

“I’m delighted to get Balogun in because it’s another real strong option for us and he’ll challenge the people for the shirt and that’s what I want,” the 40-year-old said.

“I want real competition for places because hopefully, that will bring the best and consistency out in individual players.”