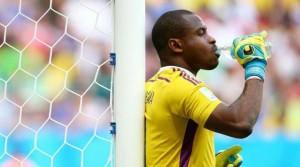 Enyeama suffered a defeat in his 100th cap for Nigeria

After playing professionally for two decades, the 37-year-old is ready to hang his boots for greener pasture

Former Nigeria international Vincent Enyeama has confirmed plans to retire from football at the end of the 2019-20 season.

Although he is yet to find a new club since he left Lille in August 2018, the former Super Eagles captain who retired from international football in October 2015, is hopeful of playing again when the winter transfer market opens in January.

Since he kicked off his professional career at Ibom Stars in 1999, Enyeama enjoyed tremendous success on the international scene and at the club level with Nigeria clubs Enyimba and Heartland, Isreali Premier League sides Bnei Yehuda and Hapoel Tel Aviv and in the French Ligue 1 with Lille.

Aside from his laudable role in Nigeria's triumph at the 2013 Africa Cup of Nations, the shot-stopper was named the Caf Champions League Player of the Year twice (2003 and 2004), the Footballer of the Year in Isreal in 2009 and he was also honoured as the best African player in the Ligue 1 in 2014.

“If I find a good project or a good team that wants to give me the opportunity, why not? I still want to play, I still love the sport but then, at a point, you need to know when to say stop,” Enyeama told Get French Football News.

“For now, that point has not arrived for me so I will find something. This is the last year of my professional career. Yes, by June that will be it. I’m waiting for the January window to come now.”

The 37-year-old had a brief training with Dijonduring the summer and he has stated why he did not seal a deal with the Stade Gaston Gerard outfit.

“I think it was misinformation from their end and a mistake reporting it as a trial because I was not there for a trial,” he revealed.

“They told me Vincent come let’s see you play, let’s assess your fitness level because they have not seen me play for a while.

“I told them they know my qualities already so why the trial, they said they just want to see if the surgery I had will let me play well again.

“I was there and everything went well and for some reasons the deal did not happen, I did not know why and they did not tell me.

“It is probably the details were not clear enough and they wanted a goalkeeper that will start on the bench, a second choice."