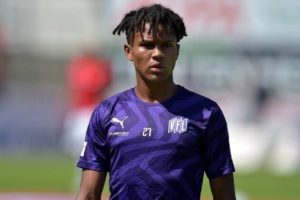 Agu who plays for VFL Osnabruck had talks with the coach of the senior national team of Nigeria on the possibility of replacing Benfica Tyrone Ebuehi in the squad of Nigeria for the upcoming friendly game against Ukraine and he will was willing to commit to the game.

However his call up to the U21 team of Germany has put a halt to the plans as he is willing to honour the call up to represent Germany in their upcoming friendly game against Greece on the 5th of September and European Championship qualifiers against Wales.

Already he has informed Rohr of his decision but he is still open to the idea of representing Nigeria in the future particularly if he fails to progress through the youth ranks of Germany.

Speaking on his invitation to the German team, the 19 year old said ” For me the invitation by national team coach Stefan Kuntz is a huge honour. The U21 of Germany has developed strongly in recent years, many Bundesliga players are part of the team, so I was overwhelmed by the call and I am looking forward to the games”, Agu said.