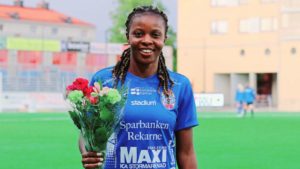 Super Falcons midfielder Ngozi Okobi-Okeoghene was on target as Eskilstuna United gained a 3-1 victory against Vittsjo in Saturday's Swedish Damallsvenskan encounter at Tunavallen.

Following back-to-back defeats to Kristianstad and Linkopings, Eskilstuna were desperate to return to winning ways, having recorded their only win of the season at Rosengard on July 10.

Okobi-Okeoghene, who scored her first league goal of the season in a 3-2 defeat against Kristianstads almost gave the hosts the lead but her effort was saved by Shannon Lynn in the 11th minute.

However, the hosts' celebration was shortlived when Michelle De Jongh assisted Ebba Wieder to level on the half-hour mark.

After the restart, Okobi-Okeoghene came close to recovering the lead for the home team but she was again denied by Lynn in 52nd minute before she eventually found the net 12 minutes later.

15 minutes from time, Felicia Rogic netted to ensure Eskilstuna wrapped up their first home win of the season and second overall.

Okobi-Okeoghene, who featured for the duration against her former team, has now scored twice in six matches, surpassing her personal best since 2016 when she scored thrice for Vittsjo.

Beside the Nigerian midfielder, her compatriot Halimatu Ayinde played for 81 minutes before making way for Swedish player Johanna Renmark.

The result moved the Tunavallen outfit to fifth in the Swedish Damallsvenskan table after gathering eight points from six games.

Ayinde and Okobi-Okeoghene will hope to help Eskilstuna continue their winning form when they visit Djurgardens on Wednesday.