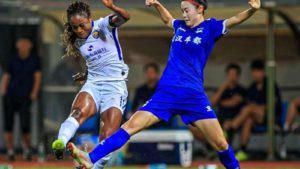 Nigeria's FrancThe Nigerian is still held up in her country due to the airport ban, while the Zambian rejoined her Chinese teammates this week

The Nigerian is still held up in her country due to the airport ban, while the Zambian rejoined her Chinese teammates this week

Ordega and Banda were missing when the Chinese Women's Super League club resumed training for the first time in June following more than two months of inactivity due to the coronavirus.

The African duo were last part of the Shanghai set up during a preseason tour in Portugal, where they trained before the world went into lockdown in March following the global health crisis.

On March 26, Chinese authorities announced the suspension of entry of foreigners into the country from March 28, 2020, which forced the Nigerian and Zambian to return to their countries.

Since the lockdown eased in June, Goal understands the foreigners, who were issued visas after March 28, are now free to enter China, which means they are expected to obtain new visas.

Banda, who completed her move to the Chinese outfit from Spanish side Logrono in February, breathed a sigh of relief after the Zambia government lifted the ban on international flights on June 26.

Having accessed a fresh entry visa, the 20-year-old, who has been in Lusaka since inspiring Zambia to a maiden Olympic Games qualification in March, left the country for China at the weekend.

For Ordega, who helped the Chinese side to a runners-up spot last season, will have to wait for a little longer with the ban on international entries still in force, despite resuming local flights this month.

With the unavailability of Ordega, Shanghai will have to rely on Banda when they begin their domestic campaign in the 2020 Chinese Women's Football Championship in August.

Ordega was also on international duty with Nigeria when Shanghai bowed 6-2 on aggregate to Addo and Chawinga's Jiangsu Suning in the Chinese Women's FA Cup semi-final defeat last year.

Without the Nigerian's services, Shanghai will hope to clinch the trophy this time, having finished fifth after a 2-1 play-off win over Wuhan last season.