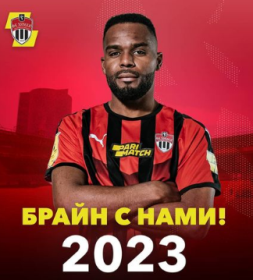 Russian Premier League club FK Khimki have announced the permanent acquisition of Bryan Idowu a statement on their official website.

The Super Eagles fullback ended his association with Lokomotiv Moscow by signing a two-year contract with Khimki, keeping him at the club until the end of the 2022-23 season and includes the option to renew the contract for another year.

Idowu spent last season on loan at Khimki, making 30 appearances in all competitions while contributing three goals and two assists.

In his first words after signing the deal, Idowu told Khimki's official webpage : "I liked what we were able to do with Khimki last season.

"It was a good football year for the team, a good season for me individually, and I want the next one to be even better.

"I feel comfortable here: great guys, qualified coaching staff. Lots of ambition. I wonder what will happen next and what we can show together with this team. "

The Saint Petersburg-born defender started all of Nigeria's matches at the 2018 World Cup held in Russia.