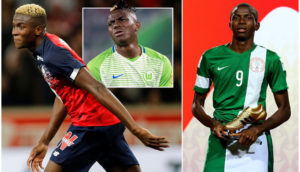 It has been suggested that you are more likely to be hit by a meteorite than make it as a professional football player, but as the proverbial door slams in the face of many kids chasing their dreams, it turns out that's exactly what Victor Osimhen needed.

'I watched the Champions League. I remember of a Chelsea-Manchester United final,' Osimhen told France Football.

'I wasn't really for anyone in particular, but when [John] Terry missed his penalty… I was so annoyed that I ran out of the bar

'A lady was opening the door at the same time. Smash! I took it straight to the face, I bled a lot.

'My eyelid was split open… (laughs). I was telling myself, when they were putting stitches in: 'If I don't become a professional footballer with the passion I have for this game, I will never forgive myself…' The road has been a long one.'

The idea that you are more likely to be hit by a meteorite than make it as a professional footballer comes from a book written by Michael Calvin called 'No Hunger In Paradise: The Players. The Journey. The Dream' which looks at the number of youngsters in England likely to go pro.

But Osimhen didn't grow up in England with academies that have four football pitches, dozens of youth coaches, sports science departments and dentist centres.

The 20-year-old was born in Nigeria where he sold bottled water in the middle of the busy streets of Lagos from a young age, while his brother distributed sports newspapers and his sister traded oranges so they had enough money on the table to survive.

The Lille forward's mum died when he was very young and his father lost his job just a few months after her passing so Osimhen and his siblings had to provide for the family.

In his spare time, the striker scrambled around open dumps for shoes to play football in.

'Sometimes you see, you found yourself with a Nike on the right foot and then you start looking for the other foot. And finally, you find the left foot and it's a Reebok! My sister patched everything up and it was good,' It was survival, Osimhen told France Football.

Osimhen grew up playing for a Lagos-based academy called the Ultimate Strikers. It was here where he started to catch people's attention.

Osimhen's performances didn't go unnoticed and Bundesliga side Wolfsburg pounced to sign him up just after he turned 17. 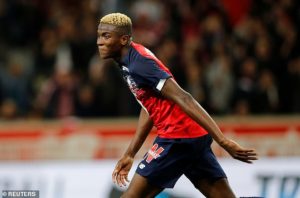 His promise didn't seem to materalise, however. He failed to score in any of his 16 appearances with Wolfsburg during his first season.

Osimhen's first campaign ended with a shoulder surgery before he had summer trials with Belgian clubs Zulte Waregem and Club Brugge as he searched for a loan move.

But the then 18-year-old was struck with Malaria and it effected his physical condition which scuppered his chances of securing a move away and put off the two Belgian clubs from signing him.

It looked as though Osimhen's dream was about to fizzle out until later that summer another Belgian side, Charleroi, came to the rescue and offered him a season-long loan contract.

This was the breakthrough that Osimhen craved, and he grasped the opportunity with both hands - scoring 20 goals and setting up four for his team-mates in all competitions.

This alerted Ligue 1 side Lille, who were about to lose talisman Nicolas Pepe to Arsenal.

The manager of the French outfit, Christophe Galtier, liked what he saw in Osimhen and signed the attacker for £10.6million in the summer.

Which brings us to today where Osimhen is now one of the hottest young prospects in Europe. 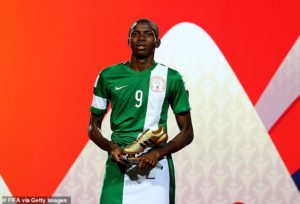 He has scored six in his first eight league games which made him the fastest Lille signing to reach that number in over 50 years - quicker than former Chelsea star and now a Real Madrid Galactico, Eden Hazard.