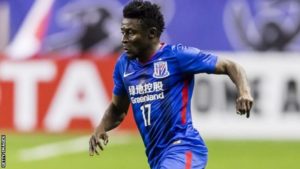 Nigeria striker Obafemi Martins has no immediate plans to retire from football and will not rush to decide his next destination.‬

‪The 35-year-old, who played for English clubs Newcastle United and Birmingham City, has been searching for a new club since his recovery from a torn hamstring injury in May.‬

‪"I cannot rush into the next club because at this stage I can make important decisions for myself and my body. ‬

‪"I want to enjoy the game and when I find the right place it will not be a difficult thing to do," he added.‬

‪Martins scored 32 goals and provided nine assists in 59 appearances for his last club - Chinese Super League side Shanghai Shenhua - before a season-ending injury in April 2018. ‬

‪He scored in both legs of the Chinese FA Cup final to help Shanghai Shenhua win the 2017 FA Cup. ‬

‪It is the first time since he began his professional career in 2001 that Martins has been without a club.‬

‪He burst into the international limelight at Italian side Inter Milan before switching to Newcastle in August 2006.‬

‪Martins scored 35 goals in his three seasons with the Magpies, later joining Birmingham City on loan in 2011.‬

‪The striker, who has also had spells in Germany, Russia and Spain, will be remembered for scoring Birmingham City's winner in their 2-1 Carling Cup final victory over Arsenal in 2011 - the club's first silverware since 1963. ‬

‪His last appearance for the Super Eagles was in March 2013. ‬