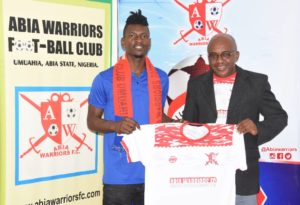 Guy Kueiman is looking forward to winning the NPFL title this term after on his comeback to the Nigerian top flight with a move to Abia Warriors, Completesports.com reports.

Kueiman, an Ivorien, was an influential member of Rivers United that finished second behind Rangers in 2016.

After that 2017 season, Kueiman moved to his boyhood club Asec Mimosa, Ivory Coast.

But the lure of the NPFL appears too irresistible for him as he hurried back to pen a deal with Abia Warriors, saying he’s looking forward to help the club snatch their first ever domestic silverware.

“It is my belief that together we can fight for trophies this season.”

The Ivorien is one of the 12 new arrivals at Abia Warriors during the sumer who were unveiled at the club’s secretariat, Umuahia.

Completesports.com checks also reveal that Nonso Paul (a midfielder from Udens of Cotonou, Benin Republic), James Odeh (Midfielder, Yobe stars), Gabriel Innocent (a defender) from El-kanemi Warriors) and Ikedinachi Nwakanama (striker from Sunshine stars) complete the list of 12 players already unveiled ahead of the 2019/2020 season that kicks off September 22.

Udube was the technical adviser of Go Round before the team was relegated.

“Udube is now with us. He is the chief coach while Emmanuel Deutsch is technical adviser.

“They were also unveiled alongside the new players.

“All the players underwent comprehensive medical tests at the Federal Medical Center Umuahia before they were engaged by the club”, Ngwaogu said.

He revealed that the club will use the forthcoming Governor Okowa Cup tournament holding in Asaba September 11–17 as part of their preseason.

Delta Force, Warriors Wolves and Kwara United are among top clubs taking part in the tournament.

Enyimba and Rangers have been ruled out of the preseason tournament following their continental engagements within the period.