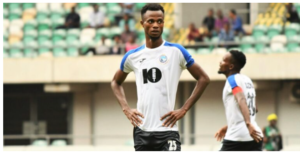 Enyimba head coach Finidi George has thumbed up forward Victor Mbaoma for his consistency in front of goal.

Mbaoma proved his goal scoring prowess once again as the Peoples Elephant held defending champions Akwa United to a 1-1 draw at the Godswill Akpabio International Stadium, Uyo on Sunday.

The striker struck late in the game as the Aba club picked a valuable point on the road.

It was Mbaoma’s 12th goal of the season for the eight-time NPFL champions.

Finidi while singing the praises of the forward also urged him to sustain his present form.

‘He (Mbaoma) has been dedicated, he’s been working hard in training and he’s always been at the right place at the right time. So he would have scored earlier (against Akwa United) but he missed one or two. But that opportunity came and he scored,”Finidi told the club’s official website.

“We are happy for him. He should keep working hard and make sure he keeps scoring goals. If you can see, he has scored without a penalty so he’s been very active scoring goals for us, we are happy he is doing that and we want him to do more.”

Mbaoma was on Tuesday named in Nigeria’s squad for the international friendlies against Mexico and Ecuador.

The striker is one of the eight home-based players included in the squad by first assistant coach Salisu Yusuf.