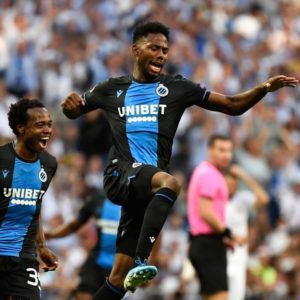 The Nigerian forward, 21, was sensational for his Belgian side, Club Brugge as he went  on to net a brace in Club Brugge’s 2-2 draw against  13-time European Champions, Real Madrid at the Santiago Bernabeu.

The Super Eagles attacker is up against Lius Suarez whose second-half brace help Barcelona finish a comeback and beat Inter 2-1.

Gnabry scored four in the second half of Bayern’s 7-2 smash over  while Hakimi netted a double to help Dortmund beat Slavia Praha 2-0 in a hard-fought victory.