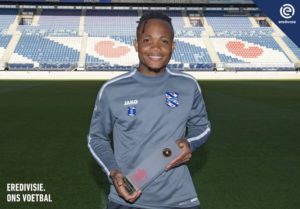 Heerenveen forward Chidera Ejuke who has been voted the best U21 player in the Netherlands for the month of September has hinted of his availability for Nigeria when the U23s take on the rest of Africa at the U23 Africa Cup of Nations for a spot in the 2020 Olympics in Tokyo.

Ejuke has taken the league in the Netherlands by storm since his arrival in the summer from Norwegian side Valerenga with four goals to his name aside the title of having completed the most dribbles than any player in the Dutch top division.

He is no doubt an integral player at the club and despite the U23 AFCON coming at the business end of the season, the 21 year old has hinted that he will be available if called up by coach Imama Amapakabo.

” I am sure we can work it out if I am called up. For now I have not received any invitation when it comes I am sure the news will be positive for all”, Ejuke told Owngoalnigeria.com.

Nigeria is grouped alongside Ivory Coast, Zambia and South Africa in the group stages of the tournament which will take place in Egypt with the top three teams at the end of the tournament securing a spot to the football event of the 2020 Olympics.