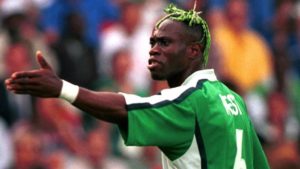 The 47-year-old former Eagles coach and midfielder played alongside Okocha for nine years across different age-grade teams of the Nigerian national set-up.

They were part of the Nigerian U-23 team that won gold medal in the football event at the Atlanta ’96 Olympics. They were also members of the Eagles side that won the 1994 African Cup of Nations (AFCON) in Tunisia.

Former Super Eagles captain Sunday Oliseh has said that Taribo West almost got into a fight with Austin Jay-Jay Okocha while playing for Nigeria.

Oliseh, Okocha and Taribo were international teammates for over seven years, enjoying success with the Super Eagles.

The three were part of the Nigerian team that won Africa's first gold medal in the football event of the Atlanta 1996 Olympics.

Oliseh and Okocha were also part of Nigeria's golden generation that won the 1994 Africa Cup of Nations and reached the second round of the 1994 World Cup on their debut.

However, despite the success they had together, Oliseh revealed Super Eagles players found it difficult to play with Okocha.

Okocha was arguably the most talented player in the squad and was one of the fans' favourites. The ex-Bolton man was known for his mastery, skills and trickery on the ball, which endeared him to fans.

But Oliseh revealed Super Eagles teammates, especially defensive players, found Okocha's skills sometimes too excessive, which almost got him into trouble with Taribo.

"With Jayjay, most people would say he was a difficult player to play with, as teammates, as defensive players,"

"But I personally had a way, an understanding with Jayjay that made it easy for me to play with him.

Oliseh added that Okocha's penchant to always dribble almost put him into trouble with Taribo, but he had to calm the ex-Inter Milan defender down.

"There was one particular game, I'll share a story with you. We were playing, and Jay-Jay was doing his normal thing, and Nigerian fans were going crazy.

"In our team, as much as we disagreed, every player was a king in their position. We had match winners – most of the players could win games, but if someone did something bad in the group, the defenders always tell me, 'Sunday tell am o'.

"They knew I was the only one who could say to Jay-Jay that 'my man, release the ball and Jayjay would release.

There was one particular game, he was doing it, and we lost the ball. And the ball was coming, and Taribo was going crazy about him. And he lost the ball one more time, and I told him, 'hey, my man, I'm tired of running.

"And the next time, he went on dribbling and lost the ball. I left the man. I let the opponent pass, and they almost scored. Taribo went crazy, he crossed ahead of me, and I had to grab him. Don't joke with Taribo. He wants to win.

But despite the issue, the trio played together until 2002, when Oliseh retired from the team in controversial circumstances.