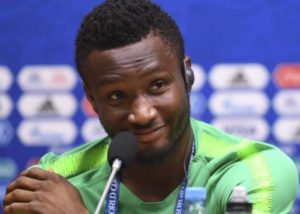 Wilfred Ndidi’s performance and goal against Newcastle United on Sunday has raised online comparisons between the player and former Super Eagles captain Mikel Obi on who the better midfielder is in their prime.

A cross-section of Twitter users had declared that Ndidi’s exploits since joining Leicester City has shown that he is way better than the former Chelsea man.

Ndidi was voted Man of The Match in the 5-0 win over Newcastle.

Mikel played for Chelsea between 2006 and 2017, winning several laurels with the English club.

King Nomso tweeted, “Mikel was the second best player in the world at the under-20 level in 2005, he had Manchester United and Chelsea on strings for his signature, changed from an attacking midfielder to a defensive midfielder and still played well while winning EPL’s and the champions league for Chelsea and winning the Nations Cup for Nigeria. You can praise Ndidi but don’t disrespect Mikel.”

Ogbuefi Okafor in his defence of Mikel as a better player wrote, “You guys are disrespectful to say the least by comparing Ndidi to Mikel because of one good game. Some are talking about stats. How many career assist does Paul Scholes, who was considered a world class during his day have? You all should put some respect on Mikel’s name.”