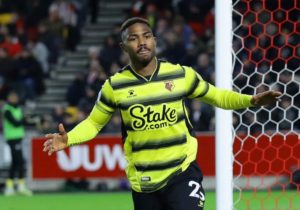 Watford striker Emmanuel Dennis will not play in the Africa Cup of Nations (AFCON) after the Nigerian Football Federation said his club are "baring fangs".

Nigeria have been hit by a double blow to their attack after Dennis and Napoli's top goalscorer Victor Osimhen both dropped out of their squad for the tournament in Cameroon.

Dennis is not being released by Watford because the Nigerian federation did not request him for the tournament in time, with the federation releasing a statement on Friday.

Speaking on Friday ahead of Saturday's Premier League game at home to Tottenham, Ranieri insisted Watford are not being disrespectful towards AFCON and that Dennis has accepted the decision to keep him at Vicarage Road.

"No, no, no - we respect everybody," Ranieri said. "They (Nigeria) have a lot of players, and they changed the manager then they change everything, and then we were ready.