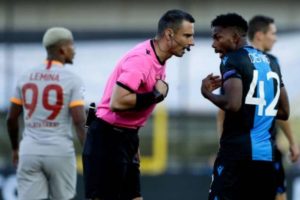 Nigerian duo of David Okereke and Emmanuel Dennis both started for Club Brugge in their UEFA Champions league game against Galatasaray at Jan Breydel Stadium on Wednesday.

Club Brugge dominated the game, but were unable to find the winner, as both side shared the spoils on the night, after Paris Saint-Germain defeated Real Madrid 3-0 in other Group game.

Okereke thought he had score the winner but was denied by a fine save from Uruguayan goalkeeper Muslera, before he was replaced on the hour mark by Ikoma Lois Openda.

Emmanuel Dennis on his part, gave good account of himself, but didn’t do enough to influence the game.

He later joined his compatriot on the bench 13 minutes later and Mbaye Diagne took his place on the pitch.