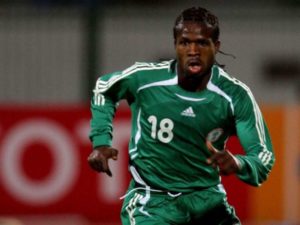 Obodo, 37, made this known in Tuesday’s edition of ‘No Holds Barred’ on Brila FM.

“We have players who play for some of the big clubs in Europe but there is one particular thing they lack which is personality,” the former Perugia, Fiorentina and Udinese midfielder said.

“Nigeria is not a small country, especially when it comes to the national team. For you to break into the team despite the number of players scattered everywhere it’s not easy.

“So what I’m saying is that most of the players don’t have personality. There are some games that would be difficult and we needed someone to do the magic. That’s when we had people like Jay-Jay Okocha, Nwankwo Kanu, Yakubu Aiyegbeni, great players that would bring their personality, do something extra when the team needs to score and they would deliver. But unfortunately, there is nothing like that now.

“Sometimes when I watch the current team I’m always scared compared to our time. Even when they score a goal I’m always afraid for them not to concede.”

The 2006 AFCON bronze medal winner, also clamoured for the return of Victor Moses back to the Eagles.

“He is still in good shape, we watch him in the Champions League and he is still doing a fantastic job. Sometimes I wonder why such a player was allowed to leave the team just like that.

“I remember when Zinedine Zidane said he is not going to play for France anymore, but the French had to go and beg him to come back because they know his worth.

“We need all those experience players in the team because the players we have now are very young. It’s like when Odion Ighalo returned, I was very happy because we still need a strong dressing room and these players need who will guide them.”